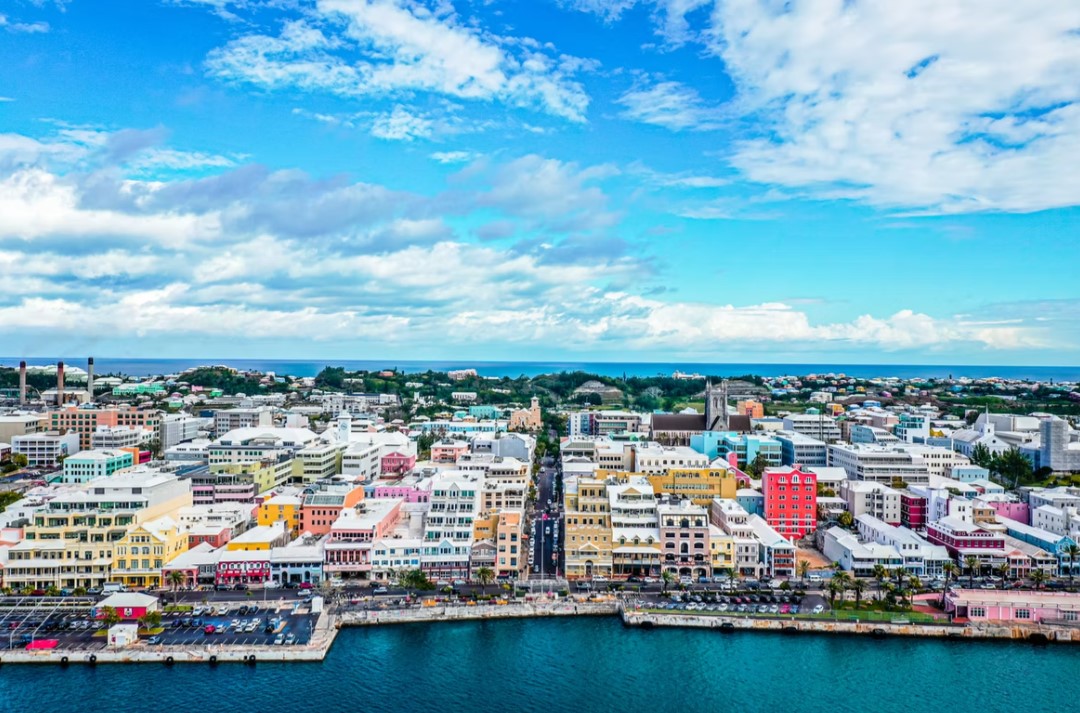 Bermuda is a picture-perfect retreat with numerous sights and things to do, nestled in the midst of the Atlantic Ocean and just a short plane flight away from major Northeastern cities in the United States. This British territory offers a fascinating island holiday, with breathtaking caverns and beautiful pink-sand beaches, as well as small villages and historical museums dedicated to its naval heritage.

As you step off the airport or cruise ship into Bermuda’s shoreline, a feeling of happiness washes over you. Bermuda’s pastel pink and yellow cottages with white roofs, tranquil blue waters, friendly people, and year-round good weather are just a few features that enhance your visit and make you want to return.

Your experience is further enhanced by top-notch resorts in Hamilton, the island’s capital, and Southampton, the island’s most famous stretch of beach. There’s no shortage of golfing and aquatic sports to indulge in if you grow weary of sunbathing next to infinity pools and being treated at premium spas.

With this list of the best tourist attractions in Bermuda, you may find even more locations to visit during your holiday.

Bermuda’s Southampton Parish on the South Shore is perhaps one of the nicest beaches in the world. Horseshoe Bay Beach, with its crescent-shaped blush-pink sand beach and stunning rock formations, draws a large number of visitors.

During peak season, from May to September, anticipate this beach to be packed, with lifeguards on duty. During peak season, go early in the morning to avoid sunbathers and swimmers. Beach clubs are located close to resorts in different areas of the island, with shuttles transporting visitors.

Along the coast, there are changing rooms and equipment rentals. Building sandcastles, boogie boarding, and volleyball are all activities that children will enjoy. The neighboring Port Royal Cove boasts shallow, tranquil waters that are ideal for families with little children. Chaplins Bay, Stonehouse Bay, Jobson’s Cove, and Warwick Long Bay all have beach pathways that link to nearby beaches.

Wander the cobblestoned lanes of the island’s East End, through taffy-colored stone houses, amid the New World’s oldest English colony. St. George was designated as a UNESCO World Heritage Site because it is where the first inhabitants came in 1612. Explore Bermuda’s past at the Bermuda National Museum Trust, St. George Historical Society Museum, Bermudian Heritage Museum, and Tucker House Museum, among others.

Tobacco Bay Beach is the most popular attraction in St. George. Tobacco beach, named after the wild tobacco that was discovered when the early settlers arrived, no longer has any nicotine plants growing, but it still offers a classic Bermuda beach experience. It’s well recognized for its limestone rock formations and clean, shallow seas that are perfect for snorkeling and swimming. At beach kiosks, you may rent snorkeling equipment, stand-up paddleboards, kayaks, and kiddie floats.

In Bermuda’s several forts and museums, the island’s rich naval heritage is revealed. Bermuda was secured by a succession of forts, particularly in St. George. On the northeastern tip of St. George, the spectacular, fully restored Fort St. Catherine includes a museum with a collection of dioramas portraying Bermuda’s rich history. It has a collection of weaponry as well as reproductions of the British Crown Jewels.

Built-in the 1620s, Gates Fort is a modest fortification at the end of the Cut Road in St. George with spectacular views of the Atlantic. Alexandra Battery, built-in 1840, is located near a popular beach, Building Bay Beach, which is famed for its brilliant sea glass.

The National Museum of Bermuda, housed in the fort at The Keep at the Royal Naval Dockyard and includes the wonderfully restored 19th-century Commissioner’s House, offers a massive collection of items and exhibits relating to Bermuda’s nautical history. The fort, which was built to protect the whole naval base, has seven bastions and ramparts. In eight historic display buildings, visitors may learn about shipwrecks, conflicts, and more.

The Commissioner’s House, the Western Hemisphere’s oldest cast-iron frame residential residence, takes you back in time with period furnishings and exhibitions on the island’s military history. Don’t miss the amazing Hall of History painting, which takes up all four walls of a chamber in the home and was made by Bermudian artist Graham Foster.

Grab a bite to eat and relax on the wraparound veranda while admiring the breathtaking views of the island and the Atlantic Ocean. The most lovely lambs roaming the grounds are the greatest part.

For good reason, Bermuda’s Crystal and Fantasy Caves are among the most popular tourist attractions. You may walk on floating pontoons overlooking crystal-clear, blue waters of the underground pools, which are all lighted up with a state-of-the-art lighting system to bring out their natural beauty, in the island’s beautiful caverns.

As you make your way into the caverns, take at the amazing rock formations of soaring stalagmites rising from deep within the lake and limestone icicles pouring from the ceiling like frozen waterfalls. Informative guides explain the caverns’ history and geology, which are considered to have been created 1.6 million years ago during the Pleistocene Ice Age.

Look no farther than these beautiful caverns for your wedding event site if you want to tie the knot in a unique location. Photograph against the stunning backdrop of turquoise seas and imposing stalactites. Candlelight and blooms provide a romantic atmosphere, while a seating area allows guests to toast after the ceremony.

Many ships have perished along the archipelago’s dangerous reefs, which stretch for miles on the archipelago’s western and northern borders. Bermuda was dubbed the “Wreck Capital of the Atlantic” as a result of this. Although these reefs were formerly perilous to mariners, they today provide some of the greatest wreck diving in the Atlantic. Divers may explore sunken ships that date from the 1600s to the late 1990s, some of which are only 30 feet below the surface (making it accessible to snorkelers as well).

The Cristóbal Colón, a 499-foot-long luxury Spanish liner that sank in 1936, is Bermuda’s biggest known shipwreck and one of its most popular dive destinations, offering divers hours of underwater exploration because of its sheer size and abundance of marine life. The Irsto (Aristo), a 250-foot-long Norwegian freighter that sunk in 1937 and is brimming with gorgeous coral, is another wonder for divers exploring the underwater environment around Bermuda.

The Masterworks Museum of Bermuda Art, located in the Botanical Gardens, houses a collection of over 1,500 items of Bermuda-inspired art from the 1700s to the current day. Georgia O’Keeffe, Winslow Homer, Charles Demuth, Jack Bush, and Albert Gleizes are among the artists represented in the museum’s permanent collection. It hosts shows by modern Bermuda artists on a regular basis.

The majority of the Bermuda Collection features island scenery and represents the culture and people that call Bermuda home. Two major galleries, a gift store featuring locally manufactured arts and crafts, and Homer’s café are all part of the museum (named after Winslow Homer).