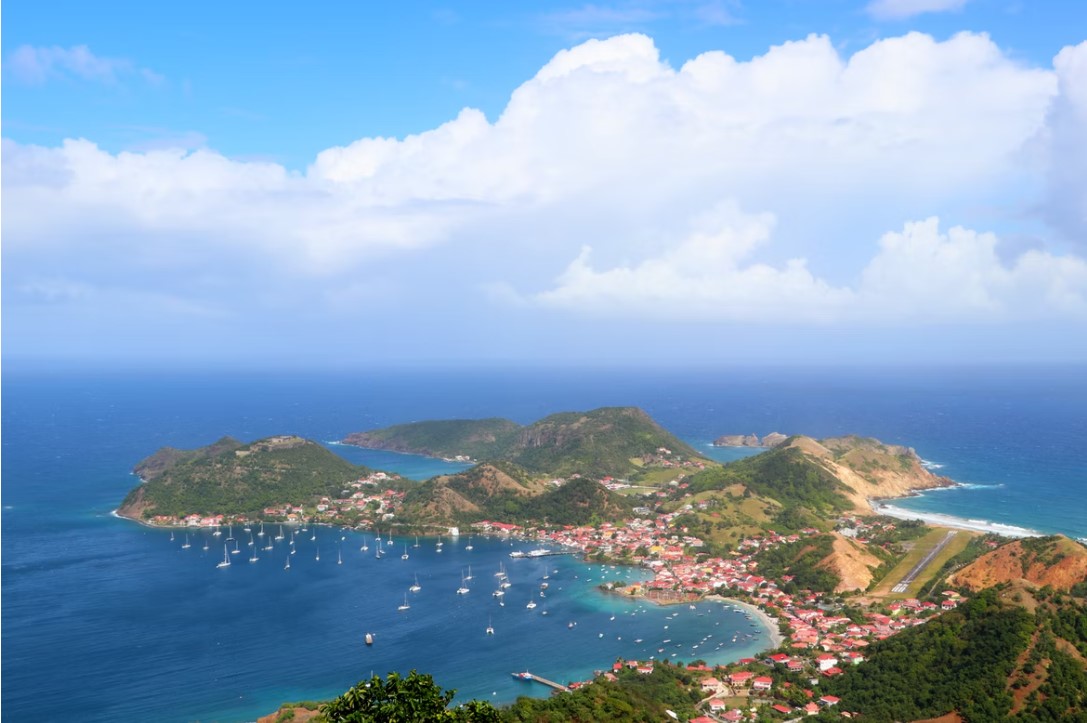 Guadeloupe is a magical place to visit because of its evocative blend of lush natural beauty and rich Creole and French culture. The archipelago is a French overseas territory, and Guadeloupe’s cuisine, language, and culture reflect this close relationship.

On a map of Guadeloupe, the main landmass resembles a butterfly, with two main islands: Grande-Terre to the east and Basse-Terre to the west, divided by the Rivière Salée, a thin mangrove waterway.

The coastline is surrounded by palm-fringed beaches, while the interior is lush and hilly, with waterfalls, hot springs, and an active volcano. The golden shores of these main islands are home to the majority of Guadeloupe’s hotels and resorts, as well as many of the islands’ tourist attractions, and Pointe-a-Pitre, Guadeloupe’s largest city, and the cruise port are located on the southern shore of Grande-Terre.

The smaller islands of La Desirade, Les Saintes (also known as Îles des Saintes), and Marie-Galante are also part of Guadeloupe and offer beautiful beaches and charming villages. Birding, photography, hiking, and water activities like snorkeling, swimming, and diving are all popular on Guadeloupe’s islands. Guadeloupe also hosts a number of vibrant carnivals and events, such as the five-day Mardi Gras Carnival, which concludes on Ash Wednesday.

La Grande Soufrière, the highest point in the Lesser Antilles, is an active volcano that hikers may reach through the Chemin des Dames trek. As long as the weather is fine, this two-hour arduous climb gives panoramic views from the massif’s highest elevations.

You’ll pass through a variety of exotic settings along the route. The volcano’s barren, black flanks are punctuated by hot springs, mud pools, and fumaroles, while the Chutes du Carbet triple waterfall cascades down the eastern face of the La Soufrière mountain from a height of 115 meters. The falls may be seen from lookouts.

Hikers who follow the route to Etang As de Pique will come upon one of the largest of the mountainside lakes generated in the volcanic massif’s craters, Etang As de Pique. Sturdy hiking boots, plenty of water, and a respectable degree of fitness are required to complete this trek. Don’t forget to pack a rain jacket.

The volcano has erupted eight times since 1660, with the most recent eruption being in 1977.

The reserve’s varied habitats are home to a rich range of animals. Among the various marine creatures are turtles, sea urchins, enormous sponges, and an astonishing diversity of fish. Birders can see kingfishers, herons, pelicans, and frigate birds, among other species.

A guided boat tour of the reserve is available. The Blue Lagoon trip explores the mangroves and the Moustique River, as well as coral reef snorkeling and a stop at the little white-sand island of Ilet Caret, which is surrounded by bright blue sea. Make sure to request an English-speaking guide if you don’t speak French.

The Jacques Cousteau Underwater Reserve (Réserve Cousteau) is located off the coast of Basse-Terre at Bouillante and encompasses the seas surrounding Pigeon Island. Dive companies cater to divers of all skill levels, and you may snorkel around the shallow reefs or take a glass-bottom boat tour to see the coral and marine life.

The reef’s condition has deteriorated in recent years, but there are still big schools of fish and brilliant coral to be seen. The coral gardens here are home to turtles, parrotfish, trumpetfish, and barracuda, and the region also provides excellent wall and wreck diving. You may also kayak from the mainland to the reserve.

Zoo de Guadeloupe is a popular hilltop garden and nature reserve on the banks of the Rivière aux Hérbes, which borders Guadeloupe National Park. There are over 85 different animal species represented here, including several rare and endangered species.

The location is what distinguishes this zoo. Hiking pathways and hanging bridges wind through the tropical rain forest, giving the impression of being deep in the jungle while seeing the animals. Tortoises, raccoons, monkeys, jaguars, snakes, and parrots are among the numerous animal species you’ll encounter here, and you’ll be surrounded by lush palms, plants, and brilliant tropical blossoms. The rope bridges also provide breathtaking views of the surrounding mountains.

Anyone interested in learning more about Guadeloupe’s history, as well as the history of slavery and colonialism across the world, should pay a visit to this significant museum.

The structure is difficult to overlook. The remarkable tower, which is topped with a tangle of crisscrossed metal on a black granite foundation, is on the shoreline in Pointe-a-Pitre and is one of the city’s major attractions. The structure is evocatively lighted at night, with colorful lights reflecting on the river.

The museum aims to chronicle the entirety of slavery’s history, from plantation slavery through the post-abolitionist era to the present day. Temporary exhibitions highlight Caribbean artists’ perspectives on slavery via painting, sculpture, cinema, and photography, and multilingual audio commentaries provide context and depth to the dramatic presentations.

If you’re looking for something to do in Guadeloupe while on a cruise, add this to your schedule – it’s only a short walk from the cruise port – and budget at least two or three hours to see everything.