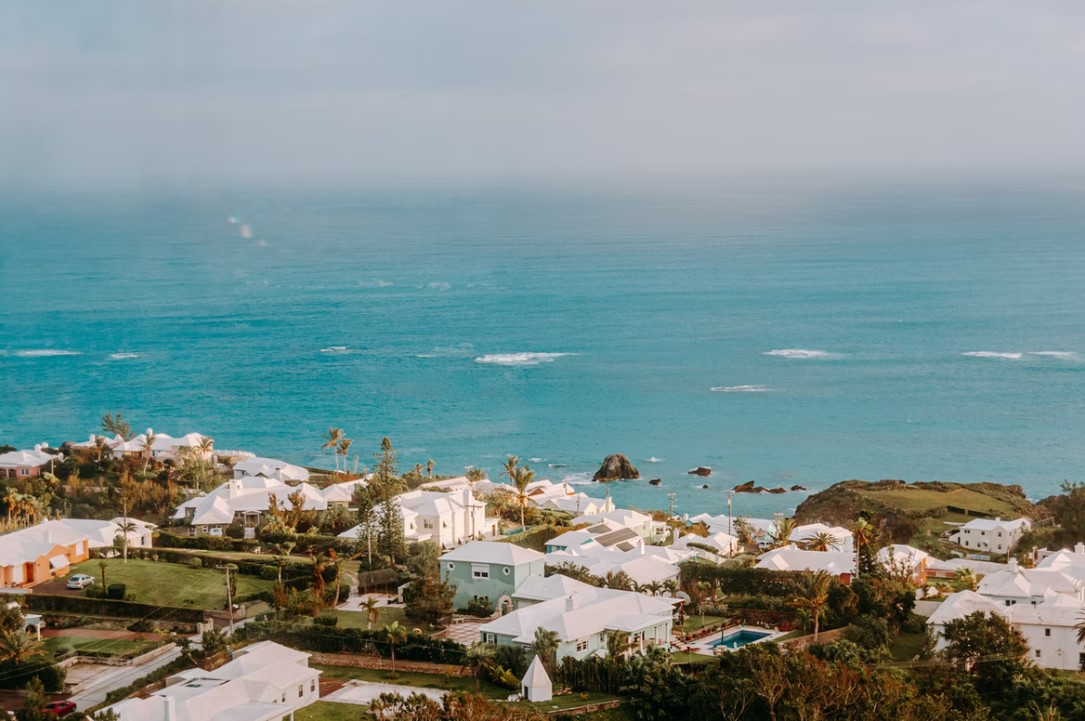 Bermuda is a picture-perfect retreat with numerous sights and things to do, nestled in the midst of the Atlantic Ocean and just a short plane flight away from major Northeastern cities in the United States. This British territory offers a fascinating island holiday, with breathtaking caverns and beautiful pink-sand beaches, as well as small villages and historical museums dedicated to its naval heritage.

As you step off the airport or cruise ship into Bermuda’s shoreline, a feeling of happiness washes over you. Bermuda’s pastel pink and yellow cottages with white roofs, tranquil blue waters, friendly people, and year-round good weather are just a few features that enhance your visit and make you want to return.

Your experience is further enhanced by top-notch resorts in Hamilton, the island’s capital, and Southampton, the island’s most famous stretch of beach. There’s no shortage of golfing and aquatic sports to indulge in if you grow weary of sunbathing next to infinity pools and being treated at premium spas.

With this list of the best tourist attractions in Bermuda, you may find even more locations to visit during your holiday.

With a cosmopolitan and vibrant feel, Bermuda’s capital characterizes the island. With ancient structures and scenic alleys lined with colorful residences facing the port, it stands out. This is the island’s cultural and commercial hub, with good restaurants, shopping, and a plethora of museums and galleries.

The city’s busiest street, Front Street, is frequented by passengers from smaller cruise ships, island-hopping ferries, and tour boats. On Wednesdays throughout the summer, the street comes alive for the weekly Harbor Nights celebration, which has Gombey dancers and street cuisine, plenty of family entertainment, and local craftsmen presenting their products from 7 pm to 10 pm.

The Anglican Cathedral of the Most Holy Trinity, St. Andrew’s Presbyterian Church, St. Paul’s Church, and the Bermuda Capital Building are all examples of architecture from the 1800s. The Bermuda House of Assembly, the Western Hemisphere’s oldest parliament, met for the first time in 1620.

The Bermuda National Gallery is housed at Bermuda’s City Hall and Arts Center, which is located in central Hamilton and exhibits art and antiquities from Bermuda, Africa, and Europe. The Earl Cameron Theater (previously City Hall Theatre) is also located there, and it hosts concerts, plays, and dance performances.

St. Peter’s Church, which was established in 1612 and is part of the UNESCO World Heritage Site in St. George, is the oldest Anglican church in continuous use in the Western Hemisphere. The building’s modest yet elegant construction exhibits 17th-century design styles as well as changes made throughout time.

The hand-carved altar is made of red cedar and is one of Bermuda’s oldest pieces of woodwork. Inside, guests may see an 18th-century throne recovered from a shipwreck as well as 1600s communion silver.

The church features two ancient cemeteries, one for white Bermudians and the other for black Bermudians, both of which date back over 300 years. The church’s western addition is currently a station on the African Diaspora Past Trail, which retraces Bermudians of African ancestry’s rich heritage and culture.

The Royal Naval Dockyard, located at the tip of Sandy’s Parish’s western end, is home to a large cruise ship port and a variety of attractions, including shopping, eating, craft studios, and entertainment, all housed in 18th-century naval structures. The National Bermuda Museum, housed within the fort’s body, is a well-curated former Royal Navy bastion.

The Museum Playground and Playhouse, as well as the Dolphin Quest instructional program for children, is located at the Dockyard. Visitors may also enjoy a white sand beach, restaurant and bar, and water sports at the neighboring Snorkel Park Beach.

Make time to visit the Royal Naval Dockyard for at least a day to see everything it has to offer.

Climb the 185 stairs to the summit of Gibbs Hill Lighthouse for panoramic views of Bermuda. Built-in 1846, the 117-foot lighthouse is one of only two cast-iron lighthouses in the world and the oldest of its kind.

The lighthouse, which overlooks the South Shore, provides views of the beaches, Hamilton City, and the Royal Naval Dockyard. You could even see migrating humpback whales in the spring.

Lunch is available in The Dining Room, which provides conventional fare such as pizzas, sandwiches, pasta, and seafood.

The Bermuda Aquarium, Museum, and Zoo

The Bermuda Aquarium, which also contains a museum and a zoo, is located in the picturesque Flatts Village on the North Shore and welcomes tourists with a 140,000-gallon fish tank. The aquarium has 200 kinds of fish and coral reefs found in the seas surrounding the island in many big tanks. There are also an outdoor turtle and seal displays where visitors may see feedings (several times a day).

The zoo holds 300 reptiles, birds, and mammals from all over the world in environments that closely resemble their native habitats. Expect to see several curious lemurs lounging or bouncing on stones in the Madagascar portion. There are other sections dedicated to the Galapagos Islands’ wildlife life, such as flocks of flamingos and tortoises.

In the spring, the aquarium organizes whale-watching trips aboard the RV Endurance to see migrating humpback whales.

The Natural History Museum is located on the grounds and has exhibits on Bermuda’s environment and geology, as well as displays on the archipelago’s animals. It has a sandbox, a playground, and numerous interactive and kid-friendly activities.

The Bermuda Railway Trail, which runs the length of the island and is part of the Bermuda Rail Trail National Park, is a 29-kilometer-long trail that travels between beaches, dunes, and cliffs. The “Rattle and Shake,” Bermuda’s lone train, ran from 1931 until 1948, leaving its traces behind. It went east to west, from St. George’s Station to Somerset Station. This abandoned path became a popular destination for hikers and cyclists, and in 1986 it was designated a national park.

The route, which spans nine portions of the island and varies in length from one mile to 3.75 miles, provides an off-the-beaten-path excursion. Visitors can begin at either end of the route or join it at any point along the way, pausing to enjoy a refreshing plunge in the water, sunbathing, or fishing at one of Bermuda’s beaches. The lovely Lover’s Lake Nature Reserve, located inside Ferry Point Park at the eastern end of Bermuda in St. George’s Parish, is located along the trail.

Spittal Pond Nature Reserve is Bermuda’s largest protected area, with well-marked paths going through forested sections with breathtaking views of the coastline. The reserve, which spans 64 acres, is ideal for bird watching and animal observation.

Wildlife such as the beautiful Sally Lightfoot Crab, the Bermuda skink (one of the world’s rarest reptiles), and buckeye butterflies may be seen. Waterfowl, black and white warblers, American redstarts, northern waterthrush, and white-eyed vireos, sometimes known as the “Chick-of-the-Village,” can all be seen by birders.

The reserve also has the original Portuguese Rock, which was chiseled by a stranded Portuguese sailor in 1543. During the months of March and April, humpback whales may often be seen migrating from Portuguese Rock. On the reserve’s craggy shoreline, look for “the Checkerboard,” an extraordinary marine limestone feature.

If you’ve ever wondered if the Bermuda Triangle is real, the Bermuda Underwater Exploration Institute is the place to go (BUEI). The museum, which is located in Hamilton, includes relics and interactive exhibits about our seas, particularly the one that surrounds Bermuda.

The museum’s showpiece is a simulated dive experience that sends you 1,200 feet below the surface to dive amid aquatic life. Teddy Tucker’s treasures (coral-encrusted coins, gold crosses, and more) were retrieved from 300 wrecks in the Treasure Room.

There’s also a stunning collection of over 1,200 seashells, a cutting-edge Living with the Ocean display with Google Earth photos that take you beneath the waves to observe reefs all around the world, and an exhibit debunking Bermuda Triangle beliefs.