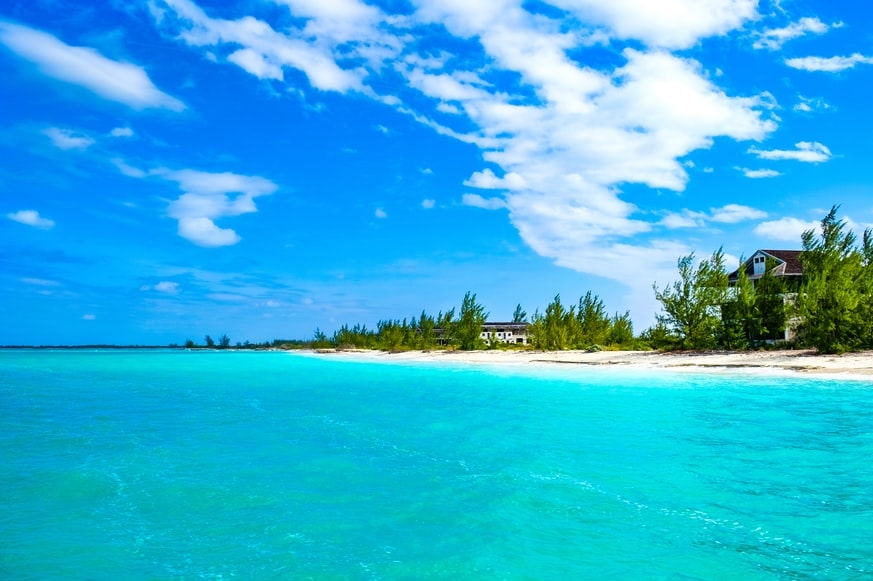 The Turks and Caicos Islands, located off the southeastern edge of the Bahamas, are home to one of the world’s biggest coral reef systems. Diving is, unsurprisingly, one of the most popular activities here. Water sports, nature paths, iguana reserves, subterranean caverns, and breathtaking seascapes are the primary draws on this chain of around 40 islands, which is surrounded by beautiful white-sand beaches.

Fishing is also fantastic, and you may see humpback whales on their yearly migratory route around these unspoilt islands from January to April. 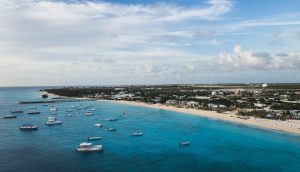 Only eight of the Turks and Caicos Islands are inhabited, and they are a British Overseas Territory. Cruise ships dock in Grand Turk’s principal harbour, which is home to the peaceful capital of Cockburn Town.

The most developed island, Providenciales, is known as “Provo,” and its stunning Grace Bay is one of the world’s most beautiful beaches. The most spectacular shoreline is found on Middle Caicos, the biggest of the Turks and Caicos Islands, with limestone cliffs tumbling into turquoise coves.

Chalk Sound, a gorgeous lagoon with limestone deposits isolated from the ocean by a tiny length of sand, is an eye-popping hue of turquoise. The region is a lovely site to snap photography and is around a 20- to 30-minute drive from Grace Bay. Tiny green-topped rock islets dot the clear seas, where iguanas abound.

Explore the clean waters by renting kayaks or stand-up paddleboards, or take a pontoon tour.

Do you want to observe some wildlife in the Turks & Caicos Islands? Little Water Cay (locally known as “Iguana Island”) is located 456 metres across the water from Providenciales and is home to rare and endangered rock iguanas. Take a sightseeing tour to get a closer look at these charming critters.

Domestic dogs and cats nearly wiped off the iguana population on the Turks and Caicos Islands, save for Little Water Cay, where they are protected. The National Trust has built two boardwalk walkways that wrap around the island’s north and south sides, allowing visitors to observe iguanas without harming their natural environment.

Kayaks may also be used to reach the island, but be aware of the strong currents in the channel.

Crossing Place Trail, a National Trust Heritage property, is a seaside walkway built by plantation residents and slaves in the 18th century. The route’s eight kilometres of hiking and bike paths today follow the original way from Lorimers to the spot where islanders formerly crossed the sandbars to trade with the people of North Caicos.

The walk winds its way down the coast, past beaches, cave formations, and inland wilderness, with breathtaking views of Mudjin Harbour and Norbellis Coves.

Because the trail is somewhat open, carry lots of water and sun protection. It is really best to wear good shoes and long pants because the track is rough and overgrown in some sections. Hikes with a guide are a great opportunity to learn more about the trail’s history and ecosystem.

This beautiful 800-acre private island, located 15 minutes by boat from Providenciales, was once a haven for pirates and is now a haven for rich nature lovers looking to unwind from their hectic life. To maintain its tranquil atmosphere, the island is devoid of phones, televisions, and automobiles.

The island’s stunning four-kilometre-long length of the beach, which matches Grace Bay in beauty and is one of the nicest beaches in Turks and Caicos, is one of the island’s best natural characteristics.

The Meridian Club Pine Cay Turks & Caicos, an upscale, ecologically conscious resort, is the only way to stay here. You can, however, acquire a day pass and visit the island for lunch with 24-hour notice (and subject to availability). You may also use some of the resort’s amenities, such as the breathtakingly gorgeous beach, superb snorkelling, and nature trails.

On a Turks and Caicos map, you’ll see Fort George Cay, which encircles the north shore of Pine Cay. This beautiful island, which is also a national park, is a favourite boating destination. Its primary features include beautiful beaches, the ruins of a British fort, and a pre-Columbian village.

Conch Bar Caves National Park has 24 kilometres of subterranean tunnels to protect. This karst limestone cave system is one of the Caribbean’s biggest cave systems.

Lagoons, stalactites and stalagmites may be found in several caves, and most feature huge bat populations. The caverns have a long history, with Lucayan Indians holding religious rites there and leaving petroglyphs on the walls.

Guided tours explain the caverns’ history and point out some of the cave’s natural attractions, such as bat populations.

The Turks and Caicos National Museum, housed in one of the islands’ oldest stone structures, is an excellent place to learn about the country’s history. Slavery, the Lucayans, the salt business, and the natural environment are among the subjects covered in the exhibits. The Molasses Reef Wreck, the oldest in the Western Hemisphere, is also visible.

The collection of messages in bottles that have washed up on beaches from all around the world is one of the most fascinating exhibitions. You may also take a tour of a thatch-roofed house, which gives you an idea of how people used to live on the islands.

The botanical garden, which is just next door, has specimens of both native and imported flora.

Stretching for more than eight kilometres, Grace Bay is one of the best beaches in the Caribbean. Powdery sand meets crystal-clear water in striking shades of blue along with this exquisite slice of coast, and coral reefs shimmer just offshore. Sunbathing, swimming, and snorkelling along this beach are among the top things to do in Providenciales.

Grace Bay Beach is part of the Princess Alexandra Marine Park, and snorkelers can view the rich marine life at The Bight Reef and Smith’s Reef in the underwater park. Best of all, you can easily access them both from shore.

Kick off the year to a great start with J.Balvin Neon Experience