Barbados 15 Unforgettable Sites To Visit In 2022

HomeNewsTravelBarbados 15 Unforgettable Sites To Visit In 2022 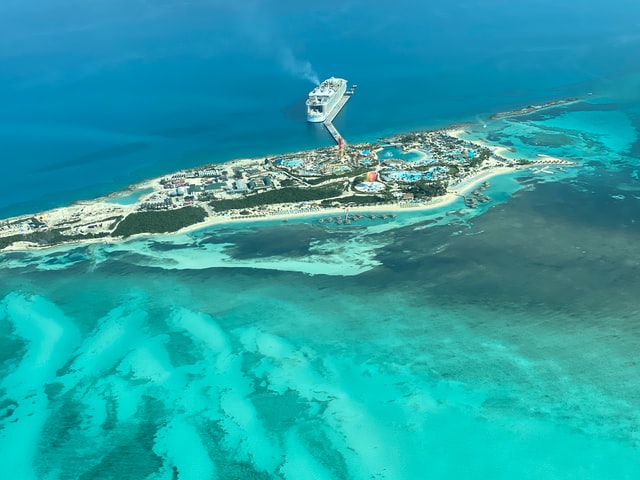 Barbados 15 Unforgettable Sites To Visit In 2022

Visiting Barbados should top your dream destination list this 2022! Barbados is an eastern Caribbean island and an independent British commonwealth nation located in the Northern American continent. With a population of about 287,371 according to the world bank population consensus conducted in 2020 and a very pleasant climatic condition with 2 major seasons a year, the Island promises to be the best location for tourists who are looking for a calm and less rowdy destination to unwind. 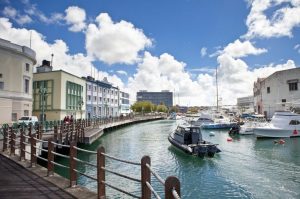 A small island with Bridgetown as its capital city, Barbados boasts of a cruise ship port, a multiple award-winning airport (‘Caribbean leading airport’ given at the ‘World Travel Awards’) and multiple beaches surrounding it. This makes the Island a very suitable spot for tourism and business. 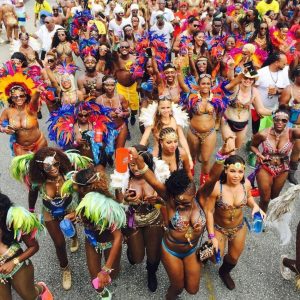 Predominantly 90% of the population, are of African descent. A smaller fraction comes from Europe (mainly British), while the rest are dispersed amongst the Chinese, Lebanese and Syrians. Most importantly, the people are warm and welcoming with English as the official language. 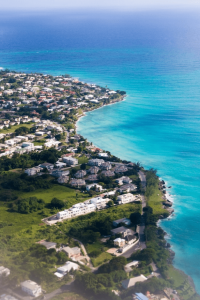 As any location in the world, Barbados is safe as long as basic safety precautions are met. Avoid walking alone on dark and lonely roads or allies and be very observant. Not to worry, generally speaking, most visits to Barbados are trouble-free. Visiting Barbados? Great!!! Here are some of the unforgettable sites to visit 2022! 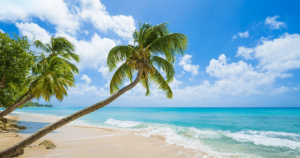 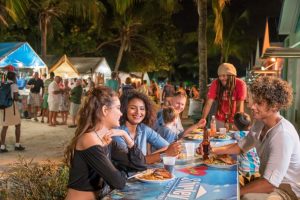 2. BARBADOS WILDLIFE RESERVE Located at the parish of Saint Peter, Barbados Wildlife Reserve occupies about 4 acres of mahogany forest, near the top of Farley hill. Experience wildlife of the Caribbean first hand and close-up. A trip to Barbados without visiting its wildlife reserve would be considered an incomplete trip. 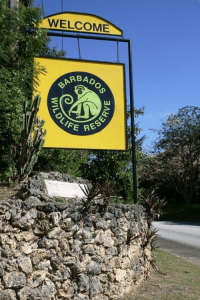 3. ANIMAL FLOWER CAVE RESTUARANT What better way to spend your day if not on a cliff, in an open restaurant and the view of the ocean. Having dinner while the ocean breeze blows away your stress has to be one of your accomplishments when visiting Barbados. This premium restaurant is located at North point at Saint Lucy parish and has been the tourist destination for decades now. Do not leave the Island without a visit. 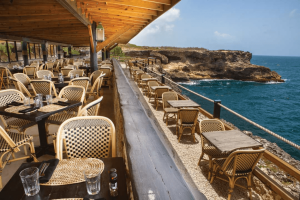 4. BATHSHEBA BAY Bathsheba is a small village, predominantly a fishing village at Saint Joseph parish which is located at the eastern coast of Barbados. Bathsheba beach, popular called the Soup bowl is a tourist destination for international and local surfing competitions which are held annually. Photographers and painters would love this location for its scenery. 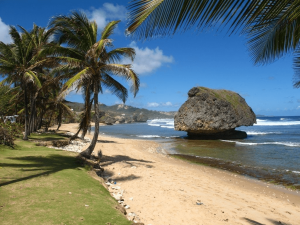 5. FLOWER FOREST BOTANICAL GARDEN A major reason for a vacation or tourism is to discover peace and tranquility. Flower forest would get you there faster. Littered with all manner of colorful tropical flower and plants, it gives a feeling of paradise on earth. This garden seated on about 50 acres of land is located in the Parish of Saint Joseph, Barbados. This is one place to visit and sure would leave a lasting memory. 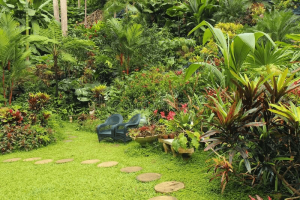 6. ANDROMEDA GARDEN Still within the parish of Saint Joseph lies this magnificent tropical garden seated on an expanse of 6 acres of land and houses over 500 different plants. Whether for educational purposes or pleasure, Androdema gardens is the perfect place to intertwine both purposes. It is no wonder the garden has acquired several international recognition and awards. It is a must-see when on the Island. 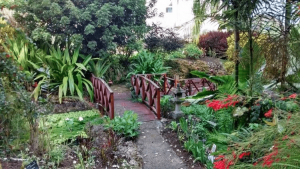 7. DOWNTOWN BRIDGETOWN The Capital city, Bridgetown, is known for its seaports and its historical British architectural building designs. Located on the island’s southwest coast, Bridgetown holds so many historical landmarks. Taking walks is recommended to get the best out of a visit to downtown Bridgetown.

8. CARLISLE BAY Still in the capital city, Bridgetown? Then Carlisle bay is the next best place to visit. It was given its name after the second Lord proprietor of Barbados, James Hay, the first Earl of Carlisle. The calm waters in Carlisle bay’s beach make it great for a good swim and relaxation. The six shipwrecks at the bay of Carlisle make it a great place for Scuba diving. Do not forget your swimsuits when visiting.

10. FARLEY HILL NATIONAL PARK This historic national park, established in the 17th century is located at Saint Peters, Benny Hall, Barbados. Though now in ruins, it was once a beautiful Mansion built for the entertainment of Royalty. Farley hill is perfect for families as it holds a lot of historical knowledge and a perfect view. 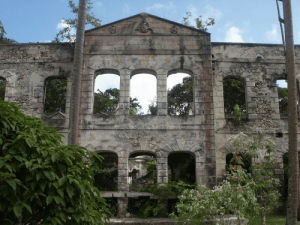 11. HARRISONS CAVE For those craving a bit of mystery and adventure, Harrisons Cave has got it all. This wonder of nature is located in the central part of the Island and is a site attraction to tourists. Feel the spooky feeling when exploring this 2.3 kilometer stretch of the Harrisons cave. The experience will not depart from your memory in a hurry. 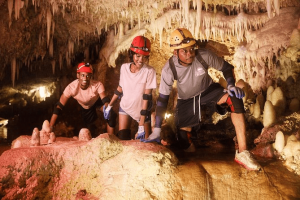 12. THE GARRISON HISTORIC AREA Lovers of history and the stories it holds would love to visit the Garrison historic area. Located in Bridgetown, Barbados, the Garrison is not only home to Barbados military defense, but also its Turf club. It is said that in 1751, the First American president and leader of the American Revolution, George Washington, once spent time with his ill brother at the district. The building is now called the George Washington House and is a site attraction for tourists. 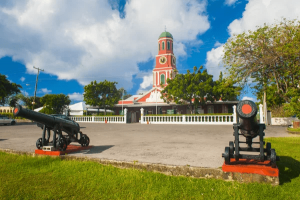 13. NICHOLAS ABBEY St. Nicholas Abbey, located at Saint Peter, Barbados, is an ancient building erected in 1658 and is one of three Jacobean mansions in the western hemisphere. This old plantation house, which is also a museum and rum distillery, is a must-see when in Barbados. 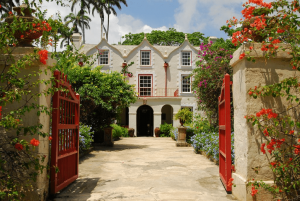 14. CRANE BEACH Among other beaches in Barbados, this pink sanded beach, Crane beach, is considered to be the most beautiful. Crane beach is found in the Parish of Saint Phillip and is about 6 kilometers from the Airport. It is one of Barbados’ most popular beaches and its rich vegetation and unique cliffs among other things make this so. 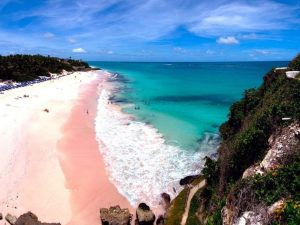 15. THE EMANCIPATION STATUE The emancipation statue was originally sculpted by the island prominent sculptor and architect, Karl Broodhagen. The statue symbolizes the ‘breaking of chains’ of slavery at emancipation in 1834. The sculpture is also called ‘Bussa’, named after a West African slave who held the first rebellion against rights and freedom in 1816. If you love history, you would not miss visiting this site. The Emancipation statue is located in east Bridgetown. 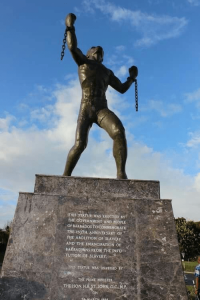 Thinking about traveling to experience Barbados in 2022? Be sure to check our Caribbean Travel Requirements COVID-19 updates for the latest requirements for travel to Barbados as well as other Caribbean countries including  Antigua and Barbuda,  St. Kitts and Nevis and Trinidad and Tobago. __M.E.