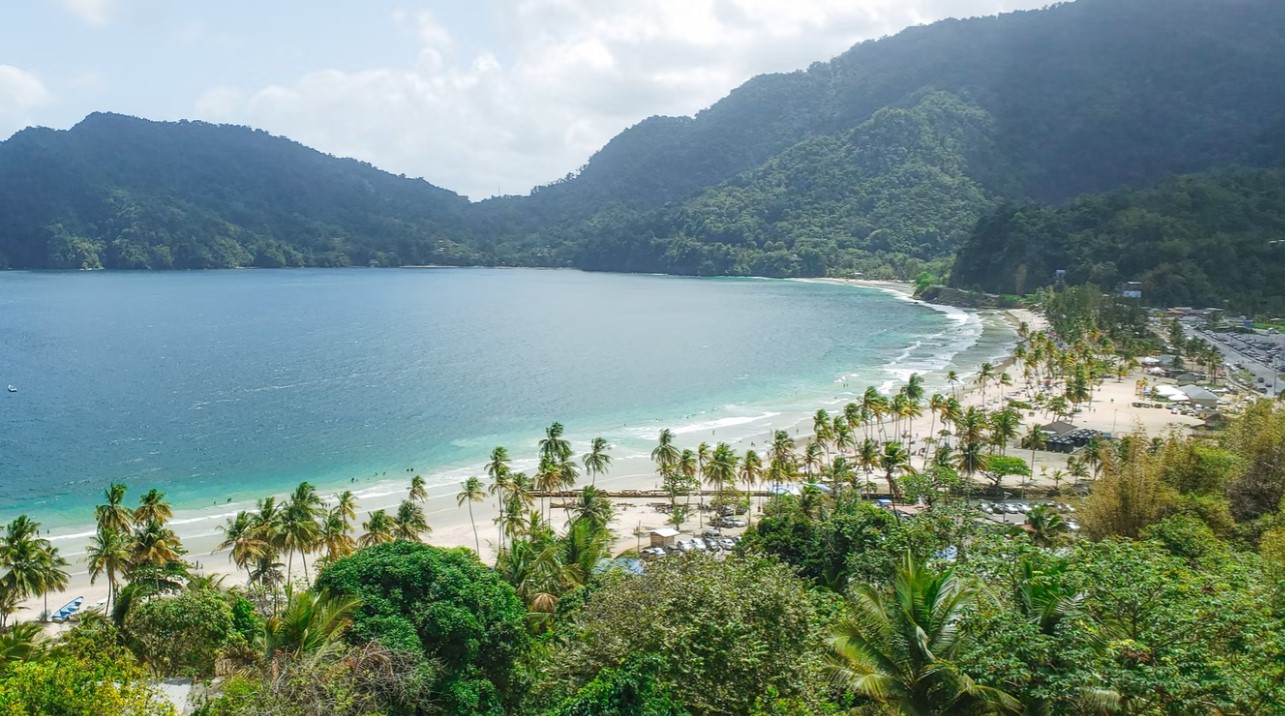 Trinidad and Tobago are two islands united as one nation, each with its own distinct personality.

The busier of the two and the southernmost of all the West Indian islands, Trinidad, is located near Venezuela. There are some remarkable examples of colonial and Renaissance-style architecture in the busy city, Port of Spain, as well as a diverse cultural mix of Creoles, Africans, Amerindians, Europeans, and East Indians. Nearby are popular palm-fringed beaches, and three forest-clad mountain ranges cut the island in half, producing dramatic panoramas.

Tobago is Trinidad’s younger sister, and it is naturally gorgeous. Rainforests, reefs, and white-sand beaches are the main tourist draws, with good snorkeling and diving options. The simple atmosphere and stunning landscape draw many independent tourists to the islands.

Both islands are particularly well-known for their great birdwatching, with numerous avian species from adjacent South America contributing to the island’s biodiversity. Trinidad and Tobago’s Carnival, which takes place on the Monday and Tuesday preceding Ash Wednesday, is likewise well-known.

With our list of top attractions in Trinidad & Tobago, you can learn about the greatest locations to visit and the most rewarding things to do on these enticing islands.

Pack a picnic and travel to Englishman’s Bay for a bit of Tobago’s classic coastal splendor. This isolated beach is located 1.5 kilometers from Castara and is well worth the trip. One of the most popular things to do in Tobago is to relax on the beautiful beaches.

If you’re searching for the ideal postcard image to make all your pals back home envious, here is the place to bring your camera. Jungle-clad hills dotted with palms drop down to this magnificent crescent of golden beach and jade-green water.

This magnificent stretch of coast’s secluded position makes it one of Trinidad & Tobago’s most romantic spots. In the pristine water, you may swim and snorkel, and if you want to make your beach time more pleasant, you can hire chairs and umbrellas from the little café in the parking lot.

Bamboo bird feeders and other trinkets are sold at a few gift stores here. The scenery, though, is the star of the show.

Pigeon Point, also known as the Pigeon Point Heritage Park, is one of Tobago’s most prominent beaches. The azure seas are surrounded by white coral sand, and there are a variety of water activities available, including stand-up paddleboarding, kayaking, and snorkeling.

Unlike Englishman’s Bay, this beach has a lot of facilities, making it an excellent area to spend the day. There are snack bars, shops, change rooms, and thatch-covered seats, as well as the option to rent sun loungers. However, there is a charge to enter the beach.

Boats depart from here for snorkeling at Buccoo Reef and swimming at Nylon Pool, a meter-deep offshore sandbar with crystal-clear blue water that resembles a big swimming pool.

The Caroni Bird Sanctuary (Caroni Swamp), located just south of Port of Spain, is a nature lover’s paradise. The scarlet ibis, Trinidad, and Tobago’s national bird, breeds in this network of mangrove-lined rivers.

Afternoon boat cruises scour the estuaries for these magnificent flame-colored birds. If you go on a cruise right before sunset, you’ll be able to photograph the birds as they gather together in enormous groups to roost for the evening. It’s a fantastic photo opportunity.

Many other species of wildlife, such as herons, egrets, cormorants, tree boas, anteaters, and caimans, can be seen in the area, which is rich in biodiversity. There are also fishing and photography trips offered.

The red-roofed church tower of Mount St. Benedict Monastery, which rises above the Northern Range Hills over Tunapuna, is one of the most outstanding sites east of Port of Spain.

This community of Benedictine monks was founded in 1912, and it is the Caribbean’s biggest and oldest monastery. The monastery complex, which includes religious structures, a farm, a rehabilitation center, and a guesthouse, was founded on the ideas of self-sufficiency and friendliness to outsiders.

In the surrounding forest, hiking and birding possibilities abound, and the monastery is known for its yogurt, which is delivered to stores across the nation.

The Main Ridge Forest Reserve, which is rich in biodiversity, is said to be the Western Hemisphere’s oldest legally protected forest. More than half of the island’s bird species live in the reserve, including the blue-backed manakin, collared trogon, and several hummingbird species, including the uncommon white-tailed sabrewing hummingbird.

Frogs, lizards, snakes, and butterflies can be found when hiking through the thick vegetation. One of the most picturesque ways to explore the forest is to drive across the reserve from north to south, towards Tobago’s eastern edge. Hiking routes and freelance guides may be found at the ridge’s peak.

Maracas Bay, surrounded by coconut trees, is one of Trinidad’s most recognized beaches. The picturesque 40-minute journey from Port of Spain through the hilly jungle offers spectacular vistas of verdant peninsulas extending into the sea.

The beach is one of the most gorgeous beaches within a short distance of the city. This lovely strip of golden sand is lapped by a deep blue bay, and lushly-cloaked slopes rise at its boundaries.

This is a terrific area to spend the day in Trinidad soaking up the local culture. Locals love to “lime” (hang out and enjoy the atmosphere) here, and it is one of Trinidad’s most popular lime spots.

The Asa Wright Nature Centre & Lodge in the Arima and Aripo Valleys is a birder’s delight, with 1,500 acres of deep woodland. At this former cocoa, coffee, and citrus plantation, hummingbirds, woodcreepers, pygmy owls, trogons, and the uncommon nocturnal oilbird are just a few of the avian species seen.

You may take a birding excursion, have lunch or high tea on the verandah, or overnight in one of the cottages. The money raised from guests goes toward forest protection, new property purchases, and environmental education activities.

Hummingbird enthusiasts will like the Yerette hummingbird sanctuary, which is located deep in the Maracas Valley. The admittance price includes an interesting talk by the owner, the opportunity to photograph the hummingbirds while they feed, and a small lunch, although reservations are required.

If you’re looking for a place to go birding in Tobago, go to Adventure Farm & Nature Reserve. In the tropical gardens, you may witness everything from motmots to bananaquits, as well as numerous gorgeous hummingbirds fluttering around feeders.

This bustling corporate town, which serves as the country’s capital, is noted for its numerous beautiful examples of colonial-style architecture, as well as a few tourist attractions.

Taking in the architectural features of Queen’s Park Savannah is one of the most popular things to do in Port of Spain. The large green park is lined by beautiful houses known as the “Magnificent Seven.” Fans of architecture should also pay a visit to the Red House Parliament in Woodford Square.

The stunning Royal Botanic Gardens, which adjoin the president’s palatial palace, and the National Museum and Art Gallery, which has exhibitions on local art, history, and culture, are both located near Queen’s Park Savannah.

However, Port of Spain is arguably best known for its raucous Carnival. The city comes alive with an exhibition of colorful costumes, limbo competitions, and infectious calypso and soca sound on the Monday and Tuesday before Ash Wednesday.

Little Tobago Island, off the coast of Tobago, across from Speyside, is one of the Caribbean’s most significant seabird sanctuaries. The island is deserted, and there are several kilometers of pathways that wind their way through the beautiful vegetation.

Look seaward from the hilltops for the best views, and you’ll see big groups of red-footed boobies, red-billed tropicbirds, and frigate birds. The island is home to more than 50 bird species, including the Audubon’s shearwater and laughing gulls.

As they loop past the tiny Goat Island in Tyrrell’s Bay, glass-bottomed boats transport you to the island, displaying the coral reefs below. Snorkeling on the neighboring reef and a trek to the island’s top is frequently included in tours.

Although it may seem strange to visit a wildlife refuge in the heart of an oil refinery, this is one of Trinidad’s top bird-watching places. The 30-hectare sanctuary, which is surrounded by thick tropical flora, has an educational center and nature walks along lily-topped lakes where you can see species like the scarlet ibis, black-bellied whistling duck, and white-cheeked pintail.

Photographers seeking to get a close-up image of one of these feathery beauties would love this location.

Spectacular! 2022 Sol Rally Barbados Is Back.