Cuba: A look into the most popular culture and traditions

HomeNewsCuba NewsCuba: A look into the most popular culture and traditions 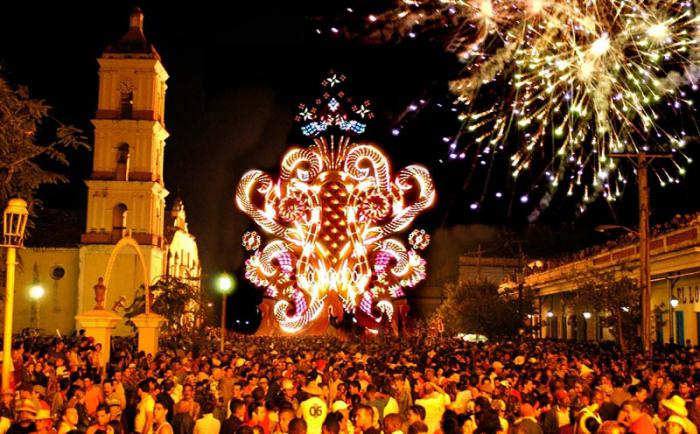 Cuba News Island Of The Week

Cuba: A look into the most popular culture and traditions

Cuba’s celebrations are clearly infused with Caribbean flavor. Both the music and the dances that characterize the main traditions of Cuba are part of that stamp of Cubanness for which Cubans are known internationally. The festivities in Cuba can be divided into two fundamental groups: The official ones (which are those related to the date of the revolution and the heroes or martyrs of Cuba) and the national ones made up of festivals, partying, carnivals and dances. The latter have a significant cultural and religious influence of Catholicism and Santeria, two of the most popular religions in Cuba. In each of them, the rhythms of Cuba are emphasized, such as timba, rumba, trova, jazz, mambo and others adapted to their culture. On the other hand, others are mostly associated with the history and culture of the different regions that make up the island and also with its gastronomy. In all the typical parties of Cuba you can find many groups of people, since these days are presented as holidays for workers who enjoy dancing and singing on most occasions until dawn.

On the other hand, tourists still enjoy Cuba and its traditions, because this is precisely the type of tourism that visitors expect to have in any destination. Knowing the most representative places and the history of the place you visit is important, however being in contact with the locals and experiencing their customs, some find it much more interesting.

Destinations such as Santiago de Cuba, Cienfuegos, Havana, Guantánamo and Pinar de Río have their own typical festivals, which are accessible to locals and tourists, since most of these are celebrated in open places, where a greater variety of people can coexist. amount of people.

If you want to enjoy them, you just have to plan your travel calendar according to your interests, taking into account the dates on which these festivals and traditions of Cuba are celebrated. For example, if you want to enjoy the carnival you should visit the island at the end of June or beginning of July, a period in which the first parties begin in Camagüey, Santiago de Cuba and Havana. This is also the month where the famous Caribbean music festival is celebrated.

There are Cuban customs related to the lifestyle of Cubans that also become typical parties and celebrations. Such as the final of the ball or baseball series as it is also known, domino tournaments and other events that occur throughout the year. The dates when there are more parties in Cuba are in January, June, July and December.

Among all the main traditions of Cuba associated with the celebration of parties we can highlight 7 of them. These would be ideal for those looking to learn more about the culture of this country, have fun and experience the Caribbean flavor that Cubans usually give off. At the beginning of July, one of the most anticipated festivals by locals begins, known as the fire festival. This tradition began to be celebrated in 1981 with the aim of paying tribute to the music, food, dances and traditions of the Caribbean peoples.

The party usually lasts around 8 days and is celebrated in Santiago de Cuba. A city that is known, both nationally and internationally, as the cultural capital of the island, since it has seen the birth of the greatest artists that Cuban culture has. It is also perhaps the region where the celebration of festivals and rituals that commemorate the origins of Cuba and its traditions can be observed with the greatest presence.

This festival is characterized by dance performances, plays, film cycles and many other activities. This is one of the best known Cuban customs in the world.

You will not only be in contact with the customs and traditions of Cuba, but also of other Caribbean countries such as Brazil, the Dominican Republic, Jamaica and others. It is also a propitious event to interact with the locals and experience the daily world they experience. During this date the Cuban carnivals begin in regions such as Havana, Santiago de Cuba, Pinar del Río, Las Tunas, Holguín, Matanzas and Villa Clara. The characteristics of these are quite similar between all regions.

During these days, activities are also carried out in schools with children, who are dressed in typical Caribbean costumes and perform plays. In addition, during the carnival period, in the morning and what are known by the locals as “carnavalitos” are celebrated, in which activities similar to those celebrated at night are carried out, but the protagonists are the little ones at home. This celebration is one of the most popular and attractive in Cuba. Its most important components to highlight are the lights, the dances, the color of the typical costumes of the region and the traditional Caribbean music. It is celebrated in the province of Villa Clara, in San Juan de los Remedios. It began in 1820 as a religious tradition and has evolved over the years into the folkloric mix of religion and traditions that can be seen today.

There are a large number of Cuban traditions associated with Parrandas de Remedios. Although to know them you must visit the region and experience it first hand. It is an international festival that brings together many high-level singers, composers and artists. It has an awards gala, although other activities related to this event can also be enjoyed. Distinguishes this celebration, live music by different exponents of Caribbean music. It is usually celebrated from May 14.

The exhibition, concerts and awards call locals and foreigners to enjoy the talent of Cuban musicians mainly, where salsa, ballads and traditional Cuban music predominate. It is without a doubt a presentation of talents with the indisputable seal of Cuban identity. It is a celebration that reflects the culture of the peasant in Ciego de Ávila, in the center of the Island. In this celebration music predominates, different types of typical peasant costumes, regional competitions and dances. It is an experience for tourists who want to learn more about Cuba and its history.

There are plays and of course what brings this party to life are their colorful clothes with red and blue colors. Live singers and sports competitions are also common in this celebration. A musical style that you can enjoy if you visit the region at this time is what is known locally as the ‘canto guajiro’, a genre that reflects the depths of Cuban culture and customs. Popular festival held in Cienfuegos with the aim of praising the life and work of the excellent musician Benny Moré, one of the most remembered Cuban talents by Cuban singers and writers. In this celebration you can see troupes, folk dances, Caribbean rhythms, local bands and a lot of art.

The festival is usually celebrated on November 29, on Benny Moré’s birthday, although this can vary from year to year. It is important, if you want to participate in the event, to first research the date in that year and make sure you book accommodation in the city, during that period. We can help you in this regard. Held every year since 1980 in theaters and plazas in Havana, where the art of both nationals and foreigners transcends. It is an educational space to learn about the history, traditions and fundamental beliefs of the locals.

The main objective of the festival is to remember the theatrical movement and exponent that changed the world. The date of the celebration is not always the same, so you should still find out if you decide to attend the event.

Remember that there will not only be plays from Cuba, there are also from countries like Brazil, Colombia, Australia, Spain and Germany that make their presentations. So it becomes a celebration where you can experience a mix of mainly Hispanic culture.

Best Locations for the Caribbean Bird Watching in 2022