Take a captivating journey down to Spice Isle, the multi-island nation of Grenada. Here, you can immerse yourself in a truly unique Caribbean landscape. With dramatic hills, luscious forests and a stunning Caribbean Sea blue backdrop to match. You can visit the three major islands that make up Grenada: Grenada, Carriacou, and Petit Martinique. Each island has unique offerings that are sure to delight you. Having been a member of the French Empire and the British Empire before gaining its independence in 1974, Grenada has a varied and dramatic history that has shaped it into the beautiful nation that it is today. Whether you want to explore the beautiful forest and other natural wonders of Grenada or instead splay out on the white sandy shores of the famed Grand Anse Beach, you are going to truly enjoy your retreat to Spice Isle

On the southern end of the island, Grand Anse Beach is the sugar-white sandy strip of land along the crystal clear sapphire of the Caribbean waters is the quintessential Caribbean paradise. With nearly 2 miles of beach, you can find your own little secluded spot to get away from it all. There are also several local shops, restaurants, and a local market located along the beach. You’ll be able to get a taste of the local culture while soaking up that famed Caribbean sun.

Located in the modern day capital of St. George, Fort George dates back to colonial times. Built by the French in 1706 as Fort Royal, conquered and renamed Fort George by the British in 1763, and now used by the Royal Grenada Police, Fort George has had a colorful history. You can climb up to the top of the Fort and be dazzled with the unique view of St. George and the breathtaking view of the harbor.

If you’re looking for a beach that is a little more active that the relaxing and peaceful Grand Anse Beach, then head just a little south to BBC Beach. You still get the same white sands and bright blue waters, but you’ll also be able to enjoy the ocean water park with inflatable attractions, such as slides and obstacle courses. There are also a few bars where the adults can get some refreshments.

The Caribbean is known for rum. Grenada is known for spices. Put two and two together and you are going to find some of the best rum you can. At Clarke’s Court Rum, you can take a tour of the distillery, learn about the history of the company and the rum making process, and even get to taste a couple of varieties and learn how to make your own rum drinks!

The national pastime of Grenada is cricket and there’s no better place to catch a game than at the Grenada National Cricket Stadium. You can cheer on the West Indies (also known as the Windies) or the Windward Islands teams as they play teams from all around the world!

New Flight!: For those who reside in the Mid-Atlantic region of the U.S.A., you’re in luck! American Airlines is operating a new, weekly flight out of Charlotte, North Carolina starting in the winter of 2019!

When you fly to Grenada, you will land at the Maurice Bishop International Airport on the main island, Grenada. However, given Grenada’s relatively small size and distance from many major cities or islands, chances are you will be catching a connecting flight from another island on Liat Airlines. However, if you’re lucky enough to catch a direct flight from North America, your best options will be either American Airlines or Delta Airlines. If you’re traveling from Europe, your best option will be British Airways or Virgin Atlantic. You can also catch a local flight to Carriacou, the second largest island of Grenada.

There are plenty of cruise options available to those who are looking to travel a more leisurely way. Your best options for getting to Grenada via a cruise ship would be joining a Royal Caribbean itinerary or a Norwegian Cruise Line itinerary.

If you want to travel like a true Grenadian, you can hop aboard one of the public buses. With onboard conductors as well as drivers, the bus authorities will be able to tell you how to get to where you want to go.

However, if you’d rather be a little bit more in charge of your schedule, you can rent a car from one of the local outfitters, such as Carib Car Rentals or Hertz. Just be sure to rent a car in advance! Or you can use a taxi when you need. You can pick up a taxi at the airport and get the driver’s number to help you travel around the island. This is particularly helpful because Grenada’s airport does not have a shuttle system, but some of the hotels do!

Just north of Saint George’s is the National Bird Wildlife Habitat. Here, you can hope to catch a glimpse of the Grenada dove, the national bird of Grenada. At the very least, you’ll be able to enjoy a hike through the hills and forests of Grenada.

If you want a guaranteed way to see some of Grenada’s terrestrial wildlife, you can head to the Spice Island Wildlife Sanctuary and Petting Zoo on the eastern side of the island. Here, you’ll be able to see monkeys, parrots, iguanas, and whatever other local critter is in need of some rehabilitation. You might even get to feed one or two of the animals!

Sir Eric Gairy – Sir Eric Gairy was the Grenadian leader who succeeded in earning independence for the nation and was Grenada’s first Prime Minister. His primary focus while in office was to work with the underserved communities of Grenada to lift them up to better lives.

History buffs can enjoy some time spent at the Grenada National Museum. Here, you can learn about the colonial history of the island, the revolutionary history, and more about the local art scene. Conveniently located in downtown Saint George’s, it’s a great place to spend the afternoon.

To learn even more about the colonial history of Grenada, you can head to the Belmont Estate on the northern reaches of the island of Grenada. This historic plantation, dating back to the 17th century, is still fully operational today! Located in the wilds of St. Patrick’s, you can stroll through the gardens, dine at the restaurant that showcases only local flavors, take a tour of the cocoa facilities, or instead guide yourself through the on-site museum.

Located in the south-central region of the island, in Epping Forest, is the Palm Tree Botanical Gardens. You can get lost among the natural tropical flora of the island. With just about two acres of well-manicured gardens and pathways for you to explore, your senses will run wild as you learn the true understanding of why Grenada is called the “Isle of Spice.”

If you’re looking for something more on the wilder side of the Caribbean, then head to the Grand Etang National Park. You can go hiking through a true, tropical rainforest, head up the mountains for one-of-a-kind panoramas, or even try your luck at some wildlife spotting, such as a Moana monkey or even a mongoose. While you’re hiking through the forest, be sure to head to the Seven Sisters Falls. You can sit by the edge of the water and enjoy the energy of the falls or even go for a swim.

For those looking to help protect the Caribbean’s wildlife, then consider donating to Ocean Spirits, an organization that helps save the sea turtles in Grenada while also researching the local turtle species. You can also volunteer there during your travels!

Another great way to help the underserved communities of Grenada is to donate to Food for the Poor. The donations go towards purchasing food and toiletry items for those who need them.

National Dish: Oil down: A “onepot” dish of chicken, dumplings, and vegetables

Motto: “Ever conscious of God we aspire, build and advance as one people.”

The National Flag: The flag has a red outline, which surrounds a smaller rectangle in the center. The smaller rectangle is made up of two green equilateral triangles on the sides and two larger, yellow triangles on the top and bottom. Where the four points would converge in the middle, instead, there is a red circle with a yellow star. On the left green triangle, there is a yellow and red nutmeg image. There are three yellow stars above the central rectangle and three more below. The red symbolizes courage, the yellow symbolizes wisdom and the green symbolizes the island’s vegetation. 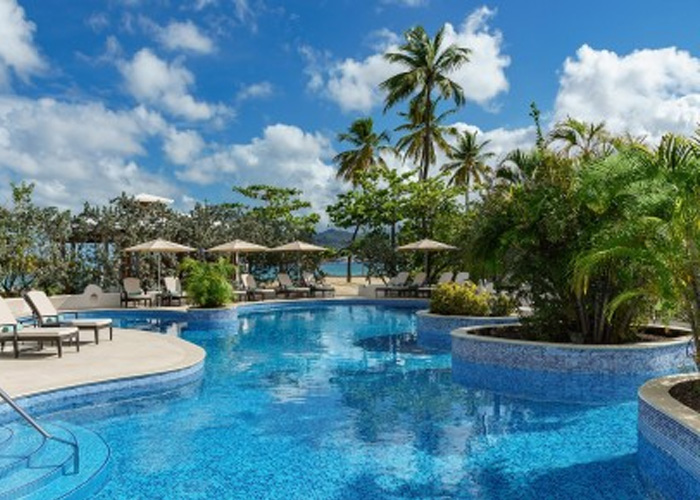 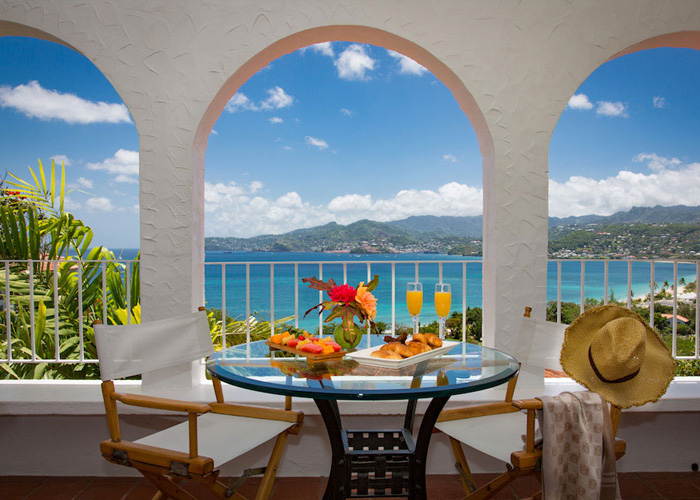 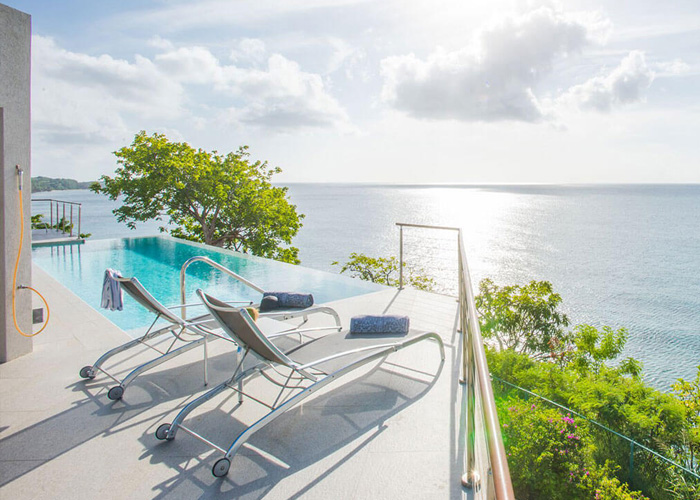 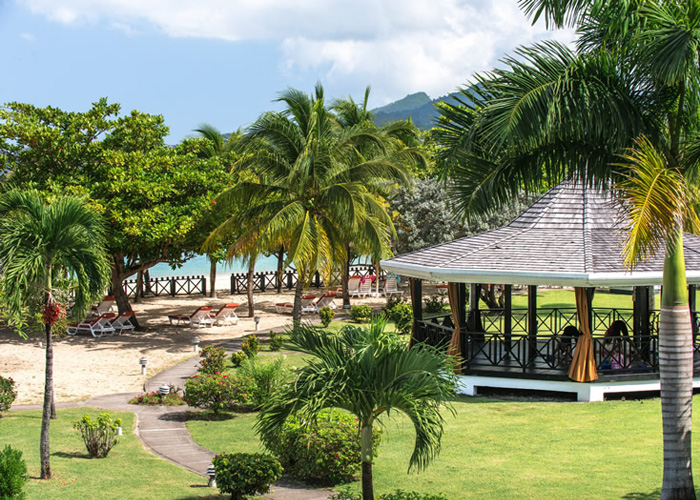 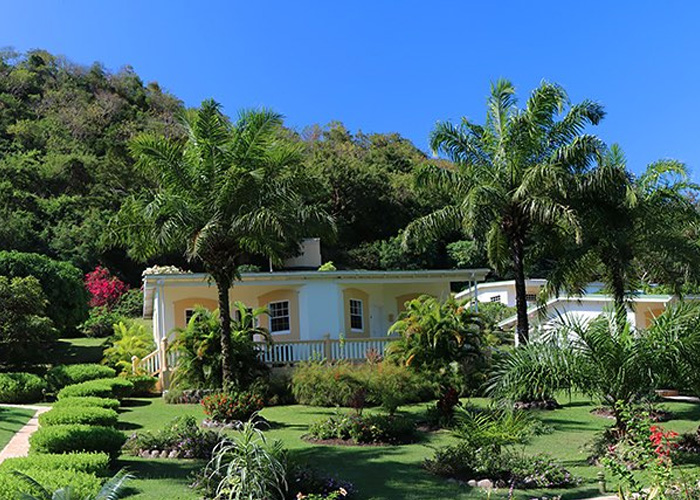