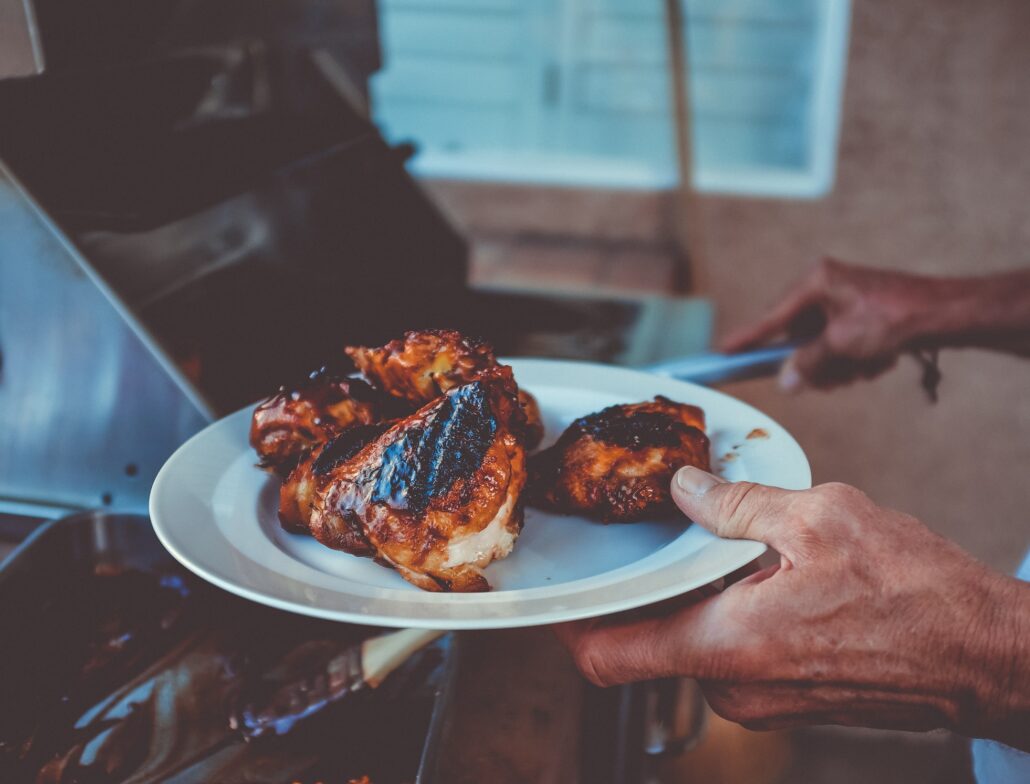 The most well-known Jamaican cuisine that has been exported from the island is jerk chicken. You know what I’m talking about: juicy chunks of fowl with soaked-up marinade taste, burnished skin, and crispy, blackened morsels of flesh thanks to the grill on which the bird was cooked.

This is why: True jerk chicken is cooked over fresh green wood, usually wood from the pimento tree, which is endemic to the Caribbean and yields another key jerk chicken ingredient—allspice berries, which are used in the marinade—or sweetwood, which is the Jamaican name for the laurel tree.

The wood from these trees is used in the jerk process in Jamaica. The wood, which is laid under huge metal grates and continually stoked to stay roaring hot, is used to cook the chicken (or the pork, which is also widely available at jerk joints). The grates are then covered with large logs of pimento or allspice wood.

As the chicken cooks, it absorbs oils straight from the wood’s surface, as well as the aromatic steam and smoke created by the greenwood and charcoals beneath it. Once the chicken is cooked—a butterflied chicken rotated once takes around two hours—taken it’s from the grill, stripped of its bones, and cut up, all the better to expose it to the spicy Scotch bonnet sauce served on the side.

But, first, let’s take a step back. Long before it reaches the grill, jerk chicken is marinated in a simple-to-make but complex-tasting marinade that imparts the meat’s sweet and spicy taste.

The jerk chicken establishments I visited in Jamaica were always hesitant to divulge exactly what goes into their house marinades, but there is a standard recipe that forms the foundation of the marinade, which different chefs or restaurants may touch on, tweaking an ingredient here and there. The following substances are included in the formula:

Allspice berries, which are the fruit of the pimento tree and are used to barbecue jerk chicken, are dried and resemble peppercorns. They have a sweet, spicy, flowery flavour, and their name comes from the fact that English immigrants in the Caribbean thought they tasted like cinnamon, nutmeg, and cloves when they tried them. To liberate the essential oils from the berries, they are pulverised.

Although fresh is preferred, dried can still be utilised.

Scotch bonnet peppers, which are native to the Caribbean, are extremely spicy, about 40 times hotter than jalapenos. For the marinade, the peppers are diced or pureed, and the seeds can be left in or removed for reduced spice.

Chop both the white and green pieces. Ginger that has been freshly cut. Peeled and grated carrots In the Caribbean, the ginger plant thrives, and it’s utilised in a variety of regional delicacies including ginger beer and sorrel, a drink made from hibiscus blossoms.

That’s all there is to it. Ground cinnamon or nutmeg, brown or white sugar, vegetable oil, or soy sauce are all popular additions to this foundation. The majority of chefs marinate their meat for as long as possible, usually at least 12 hours but occasionally up to 24 hours. As a consequence, the chicken has a lot of taste before it ever comes into contact with the smokiness-inducing coals and wood.

Jerk chicken that is well-made and genuine is highly addictive: It’s sweet and spicy, smokey and juicy. It’s delicate and tender because of the extended marination and cooking time, and the fiery chile sauce given on the side cuts through the richness of the flesh and keeps you coming back for more.

But there’s another reason why Jamaicans love jerk chicken: the island’s lengthy history with the dish. The cooking process is thought to have developed in the 1600s during colonial control, first by the Spanish and subsequently by the British. Slaves sent to Jamaica to work on the island’s sugar plantations escaped to the island’s mountainous interior, where the local Indian people sought shelter from the invaders.

These fugitive slaves, now known as Maroons, are supposed to have hunted the local wild boar and preserved meat for days in a spice-heavy marinade. When it came time to cook the meat, the Maroons dug holes in the ground, filled them with charcoal, and buried the meat in the holes, which they then covered to avoid producing smoke and attracting the notice of those who wanted to re-enslave them.

Whatever the recipe, Jamaicans are devoted to this national meal, which is prized for its historical importance as well as its deliciousness.