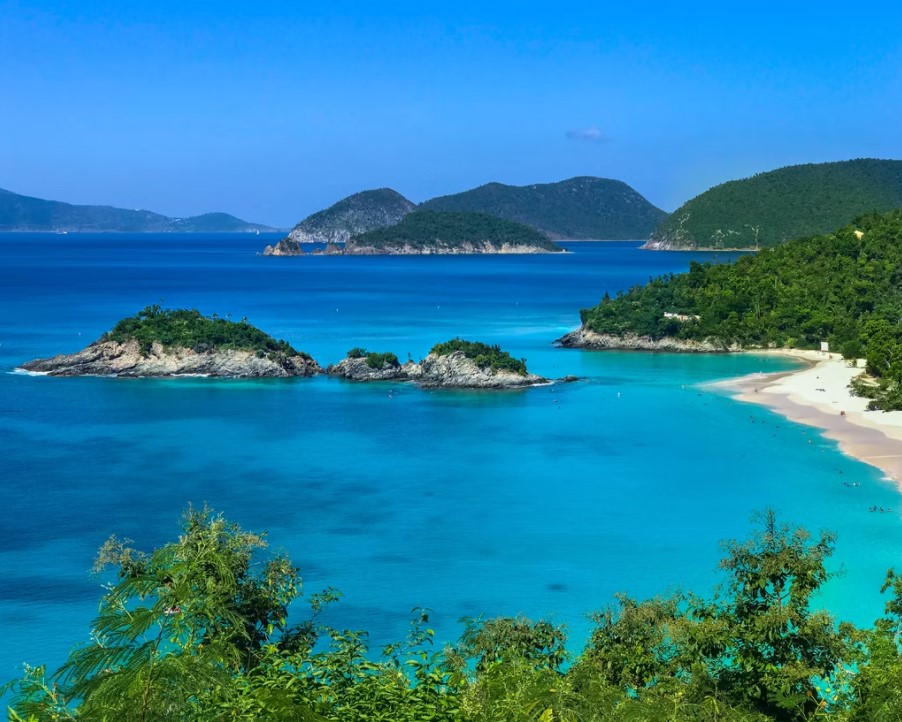 The US Virgin Islands are one of the most popular tourist destinations in the Caribbean. This American territory, located between the North Atlantic Ocean and the Caribbean Sea, consists of around 50 islands and cays, the biggest of which are St. Thomas, St. Croix, and St. John.

Following a stormy history marked by several occupations, the islands most conspicuously show their Danish influence, including some magnificent examples of Neoclassical Danish architecture.

Another advantage is a natural beauty. All of the islands have lush mountains, tropical woods, curved beaches, and rocky coves, and the crystal-clear seas and consistent breezes entice sailors and boaters to anchor in the protected bays.

Each island has its own personality. St. Thomas is the most frequented of the islands and serves as the archipelago’s main entry point. Charlotte Amalie, the capital of the United States Virgin Islands and a major cruise ship port, offers a wide range of shopping, eating, and entertainment opportunities. The majority of the larger US Virgin Islands resorts are located on St. Thomas.

The largest of the three islands, St. Croix, is less touristy than its sisters. The ancient area of Christiansted, as well as the sugar plantations, gardens, and seaside vistas along the Heritage Trail, are all must-sees. Buck Island Reef, the nation’s first underwater monument, is also located in St. Croix.

Blackbeard’s Castle, a five-story masonry structure at the summit of the famed 99 stairs, is the only one of its sort in the Caribbean. The Danish erected the watchtower in 1678, which was known as Skytsborg during colonial times. According to legend, the tower served as a lookout point for the 18th-century pirate Blackbeard (Edward Teach).

Today, the location has a prominent hotel and restaurant with stunning views of St. Thomas Harbor and Charlotte Amalie, although it is currently closed for repairs following Hurricane Irma’s damage.

A walking tour of Charlotte Amalie should include a visit to Government House. Two stories of cast-iron verandas grace this three-story, hipped-roof white home.

Government House, which was built between 1865 and 1867 and now houses the offices of the territory governor, was renovated in 1994. Many exquisite paintings by local painters, including Camille Pissarro, a St. Thomas native, may be found within.

Government House’s first and second floors are generally available to the public for tours, however, the structure is now being renovated following storm damage.

Within the walls of Frederick Lutheran Church in Charlotte Amalie, there are centuries of history. Built-in the Georgian style between 1789 and 1793, this architectural jewel is a must-see. The church was restored twice in the nineteenth century and presently has Gothic Revival components such as a gable tower.

The church’s entryway contains a stairway with “welcoming arms” (flaring at the bottom) that is typical of West Indian architecture. During the nineteenth century, the church’s congregations were divided between West Indian and Danish sections.

The church continues to hold services, and visitors are welcome.

The 99 stairs (really 103 steps) were made out of ship-ballast brick during Danish colonial periods and are a remnant from the mid-1700s. The 99 stairs are one of the numerous staircases erected on Charlotte Amalie’s high hills. They lead to Blackbeard’s Castle, which offers spectacular views of the city.

This staircase, which was built in the 1700s to make climbing Government Hill a little simpler, is one of St Thomas’ most recognized sights. Some historians believe the steps compensate for Danish engineers’ lack of understanding of St Thomas’ steep terrain — they had insisted that the city be set out in a grid arrangement. Others believe the steps were an excellent method to utilize the bricks left over from the British and Danish ships’ ballast while also making getting about the city simpler.

The park now has benches, a gazebo, and lots of shade, and it’s a great location to rest or listen to live music. During the April celebration, the garden is transformed into a Carnival Village.

A replica of the Philadelphia Liberty Bell stands at the park’s corner.

4 Astonishing Easter Traditions of the Caribbean