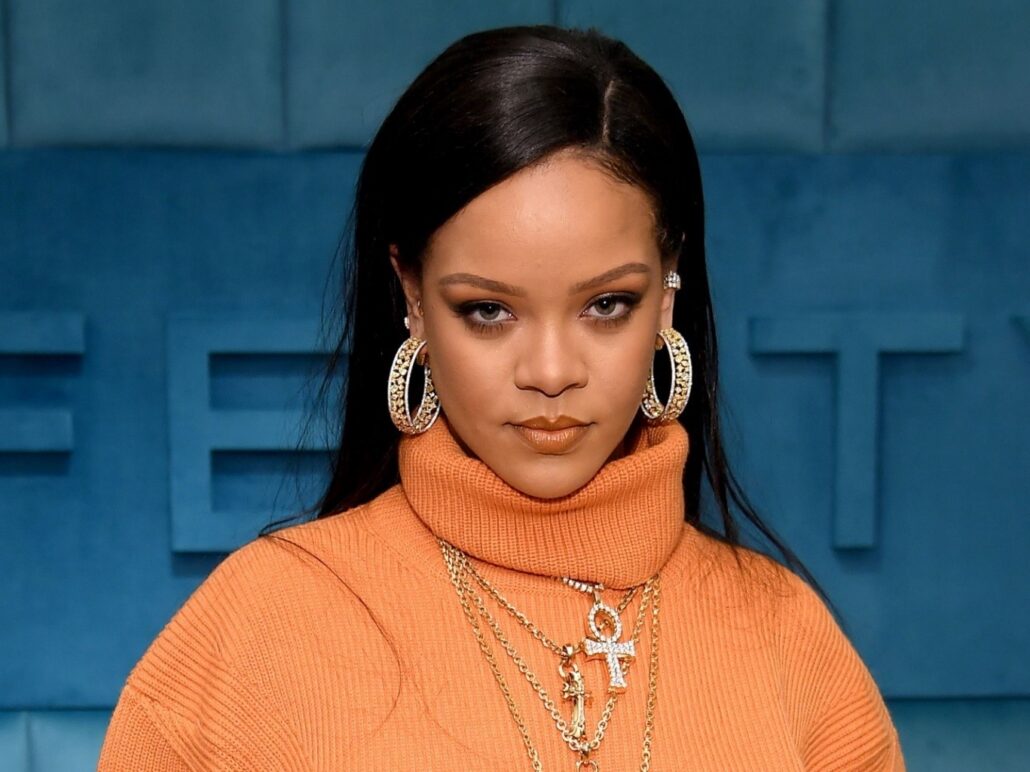 Rihanna Fenty’s rise to prominence is a truly inspiring and phenomenal story. When you look at the island of Barbados with its small population and geographical spread of nearly 300,000 inhabitants, the question arises ‘can anything good come out of Bethlehem?’ The answer is a resounding yes! Something great came out of Bethlehem or in this case, should we say, Barbados.

Over the years, Barbados can boast of producing some prominent personalities. For example, Ramos Harewood, born on the 3rd of February, 1987, an NFL superstar in the United States of America, comes from Barbados. Obadele Thompson, a former athlete, won Barbados’ only Olympic medal in Sydney 2000 by placing third in the 100-meter men’s dash. There are other prominent celebrities from Barbados worth penning down but none has made phenomenal impact than the Barbadian Icon National hero, Rihanna. RIHANNA FENTY: AN ICON IS BORN

Robyn Rihanna Fenty, globally known as ‘Rihanna’, was born on February 20, 1988. She was born in Saint Michael, Barbados, and spent a good part of her childhood in Bridgetown, Barbados. Rihanna grew up in Bridgetown with her mother, Monica (nee Braithwaite), after her parents divorced when she was 14 years of age. Her father, Ronald Fenty was a warehouse supervisor. She has 2 brothers, Rorrey and Rajad Fenty, 2 step sisters and a stepbrother. Rihanna’s phenomenal career began at the young age of 15 when she auditioned for the American producer, Evan Rogers on his visit to Barbados. By the age of 16, she had produced a demo that was sent to the singer and CEO of the DEF jam recording label. The company immediately signed her and within a year, her first album, ‘Music of the Sun’ was released in 2005. Immediately after the release of her debut album, Rihanna commenced work on her next album, ‘A girl like me’, which was eventually released in April of 2006. The album was considered a success as it sold over a million copies and ranking the top 5 in different (11) countries including Canada and Australia. It was an international success. Rihanna did not gain much recognition with that album but in May 2007, with the release of her next album, ‘Good girl gone bad’, the music star began her journey to stardom. Her single ‘Umbrella’ handed over her first Grammy award and placed her in the International spotlight.

The album was a huge success that in the latter part of 2007, Rihanna went on a tour to support the album while also performing in concerts across continents. In the United States alone, the album sold 2.8 million units which gave Rihanna a double-platinum certification by the RIAA (Recording Industry Association of America). Following a successful album, Rihanna kept releasing remixes and collaborations with other colleagues in the music industry which gradually shifted her style of music. Following the landmark album, Rihanna went ahead and released a couple of albums. ‘Rated R’ which was released in late 2009 which took her to the number four spot on the US Billboard 200 chart. ‘Loud’, which was her fifth album was released in 2010. The album had a couple of outstanding singles including the Grammy award-winning single, ‘Only girl in the world’, winning the award for ‘best dance recording’. Rihanna embarked on a tour to promote her album in 2011 which turned out to be a huge success. By November of 2011, Rihanna completed and released her sixth album, ‘Talk that talk’. The Album was a success as it charted number 3 and number 1 in the US AND UK respectively and in late 2012, her seventh studio album was released. ‘Unapologetic’ took Rihanna to the number 1 spot for the first time in the US on the Billboard 200 album chart. In 2013, her single, ‘We found love’, from the album, gave Rihanna her sixth Grammy awardfor ‘Best short-form music video’ at the Grammy Awards for that year. Rihanna is yet to release her ninth album but there are rumors that the album,’ Absolutely insane’ would be released soon. She has been doing a couple of collaborations but the world is patiently waiting for what next the Barbadian superstar has to offer. Apart from Movies and Music, Rihanna delved into the business world. She started by releasing her first fragrance, Reb’l Fleur, in 2011. Between 2011 and 2014, the budding business mogul had released 5 different fragrances which were a huge success. In 2015, she became a co-owner of the music streaming service, Tidal, and within the same year, she started a beauty and stylist agency. By 2017, Rihanna launched a cosmetics company, ‘Fenty Beauty’ under the luxury brand LVMH. She didn’t stop there but went further to launch a lingerie brand, Savage X Fenty, which was launched in the latter parts of 2018. Under the luxury brand LVMH, Rihanna launched a fashion house in 2019 and was the first black woman to head an LVMH brand. This project was later put on hold due to the COVID-19 pandemic in 2020. In July 2020, Rihanna went ahead and released ‘Fenty Skin’, a skincare brand of the Fenty empire.

Rihanna owns several properties in New York, United States, and West London worth $14 million and 7million pounds respectively. Her London house was purchased in 2018 majorly to be close to her business, Fenty fashion Earlier, Rihanna started dating Chris Brown who is also a fellow musician. The relationship ended in 2009 on grounds of domestic violence. She was meant to perform in the 51st Annual Grammy Awards but could not due to some sustained injuries from the violence by her then-lover. The incident was taken to court and Chris Brown was given a restraining order to keep a certain distance from Rihanna. Chris Brown in a statement was remorseful about his actions, stating that that is not who he is or the man he wishes to become. Rumors of the pair reuniting surfaced in 2012, arousing a lot of media attention but they finally split up in 2013. RIHANNA’S NET WORTH AND INFLUENCE

By 2021, Rihanna had made a whole lot of fortune for herself with a major percentage coming from her Fenty Beauty business. The cosmetic company co-owned by her generated over $500 million in revenue by the end of 2020 while her lingerie line Savage X Fenty raised capital at a value of $1 billion. She owns 30% shares in that company. The Barbadian musician/actor/business mogul has a net worth of $1.7 billion according to Forbes, making her the world’s richest female musician and the second richest female entertainer, with Oprah Winfrey making the top of that list. The Barbadian-born still drags in a couple of millions from her music and affiliations which summed up her total net worth. Rihanna is considered one of the most influential artists in the world owing to her success in her musical, entrepreneurial and humanitarian life. From as far back as 2006, Rihanna has been drawn towards giving back to society. She made this clear by starting a non-profit organization called ‘Believe Foundation’ aimed at helping children who have terminal illnesses. Between 2007 and 2009, Rihanna was involved in several charitable activities bordering around awareness against HIV/AIDS. Over the years, the Barbadian-born superstar was involved in a couple of humanitarian works and advocacies against different topics of interest. One of particular significance is the Women’s March against President Trump’s immigration policies in 2017. When the Indian farmers protested in 2021 against the farm bills, Rihanna lent her support towards their cause through social media, twitter and considering the millions of followers she has globally, her tweets went a long way in strengthening their cause. RIHANNA: THE AMBASSADOR AND NATIONAL HERO (NH) OF BARBADOS

After an outstanding career and involvement in humanitarian activities, it was no surprise that the musician and business mogul was furnished with the ambassadorial responsibility in 2018. According to a statement from the Barbados Government Information Office, she was she was given the task of spearheading education, tourism, and investment for the nation. Meanwhile, about a decade earlier, she was conferred as one of Barbados’ cultural ambassadors with not as much responsibility as this present Ambassadorial position, “Ambassador Extraordinary and Plenipotentiary”. This gives her the right to represent Barbados both at home and on the international scene. In her acceptance speech, Ambassador Fenty said ‘she couldn’t be prouder to take on such a prestigious title’. She also said, ‘Every Barbadian is going to have to play their role in this current effort, and I’m ready and excited to take on the responsibility. I look forward to working with Prime minister Mottley and her team to reimage Barbados’.

Barbados gained its independence on 30th November 1966 but kept the British monarch as its ceremonial head for decades but in 2021, Barbados finally disconnected from the British monarch to become an Independent Commonwealth Nation after 396 years under British rule. During this monumental ceremony held in November 2021, Prime Minister of Barbados, Mia Mottley, commended Rihanna and her dedication to the growth and wellbeing of Barbados and presented her with the title of ‘National Hero’. Rihanna is the second female in Barbados to be given this title of honor. As a young 33-year-old woman from a humble background, Rihanna’s achievement is one of exemplary courage, hard work and determination to succeed at all odds. Her story is a source of inspiration to many young Barbadian girls and a reminder that with sheer passion, determination, and discipline, anything can be achieved. Who knows where next Rihanna is headed as she still has many more years of great feats to accomplish?

Tourism recovery will be guided by a “Blue Ocean strategy,” according to Bartlett.